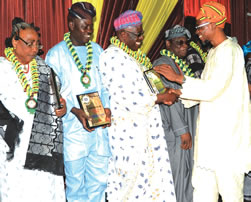 Veteran Yoruba actors, Deji Aderemi (Olofaana) and Samson Eluyemi (Jinadu) are among the stars on the red carpet when Osun State government honoured artistes from the state as part of its 20th anniversary, writes AKEEM LASISI.

Olofaana and Jinadu are two veteran Yoruba actors with similar stylistic traits that the audience or viewers can hardly resist. While Olofaana, whose real name is Deji Aderemi, is famous for the rich Yoruba proverbs and idioms that punctuate his lines in various films, the latter (Samson Eluyemi) is a custodian of biting cracks that can make his target lose their sense in the course of a theatrical conflict.


Both are, however, also from the same state: Osun, which is currently celebrating its 20th anniversary. They are among the several stars celebrated by the state government on Wednesday, as part of the celebration that has featured lectures and performances, among other programmes.

In all branches of art and culture, Osun, which prides itself as the Ipinle Omoluwabi, parades practitioners that have positively projected the country and Africa in general. This is part of the reason the Rauf Aregbesola-led administration had earlier declared that it would build its tourism development programmes around the big names.

According to a statement signed by the Director, Bureau of Communications & Strategy, Office of the Governor, Mr. Semiu Okanlawon, it was the mix of the dead and living artistes that were recognised at the event held at the Centre for Black Culture and International Understanding, Abeere.

Incidentally, one of such is Rotimi Makinde, actor-turned politician who is now a member of the House of Representatives.


At the occasion were the Deputy Governor, Mrs. Grace Laoye-Tomori, the Orangun of Oke Ila, Oba Adedokun Abolarin; and the Commissioner for Culture and Tourism, Mr. Sikiru Adetona Ayedun


While Okanlawon noted that the recognition was in furtherance of the drive by the “Aregbesola’s administration to promote culture and tourism as a way of enhancing the revenue profile of the state,” Oba Abolarin commended the Governor for according culture a prime place in its programmes.


The Chairman of the Osun at 20 Programme Planning Committee, Prof Siyan Oyeweso, is also quoted in the statement as saying, “It is our belief that by recognising those who do the state proud in the area of culture, the government will be expanding its revenue base through revenue to be generated from the sector.”


Among other artistes, Dr. Demola Onibonokuta and Funmilayo Omilani enlivened the programme with performances.

Popular posts from this blog

Photos: Girl Stripped Naked And Beaten For Sleeping With...

July 24, 2012
The story attached to these photos is that the lady being dragged around there slept with another lady's husband, and the lady prepared for her on this blessed day to mess her up. So many people have wondered how possible that could be but it is a shame it has to be caught on camera. Continue Reading...
Post a Comment
Read more

The Unfinished Business Between Ex-Plantashun Boys Over African Queen Song

December 23, 2012
Below is what the ex-Plantashun boys band member said in a recent interview with Entertainment Express concerning his issues with 2face Idibia over rights to hit song, African Queen, which they co-wrote. I know the song has generated a whole lot of revenue. Right now, I and Tuface have joint ownership of that song. But from the inception it was not like that. My publisher, BMI had to find a way to work that out. All the funds the song has been generating I’m supposed to have 50 per cent of it, which I’m not getting and I don’t just know what is happening. There is even a situation whereby somebody in Jamaica sang African Queen and some other persons like that of which I was not aware. Nobody told me that he was going to sing my song. So, there are some issues that I and Tuface need to sit down and iron out, but Tuface is difficult to get on the table. So I have decided to do it on my own. Surely, with time we’ll get to the root of the matter because we both have 50 per cent righ
Post a Comment
Read more

No Jersey, No Match...Short Film